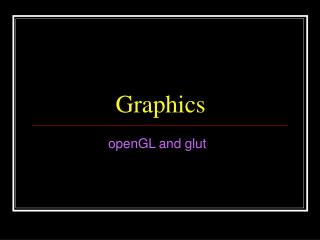 Graphics. openGL and glut. GRAPHICS Adapter. The graphics adaptor contains 2 parts. Video Memory holds the computer’s representation of the image. can be accessed by the video control circuitry and the CPU. greater resolution requires more memory because there are more pixels. Graphics - . objectives. learn about the types of graphics that are available develop a basic graphics applet develop a

Graphics - . web graphics format's. image format's gif format: use a maximum of 256 colors, and are recommendable for

Graphics - . use these to make graphics. keep the colors the same to maintain branding. click on them, then click on

GRAPHICS - . source: www.aifweb.com. resolution. the resolution of an image is determined by the number of individually

Graphics - . web design professor frank. graphics. what are the most effective uses of graphics? w hat’s the best way

Graphics - . agcj 407 web authoring in agricultural communications. overview. discuss the importance of graphics in a web

Graphics - . problem solving with computers. what is a color model?. a method for representing colors each color is

graphics - . aaesha mohammed samsoom - h00249885 at3. graphics. a re visual images or designs on some surface, such as a

Graphics - . what is a graphic ?. a graphic is an image or a picture e.g.  pictures can be either drawn or

Graphics - . ms. brewer fall 2012. 1. please obtain your folder…check out your quiz from yesterday, ask me any