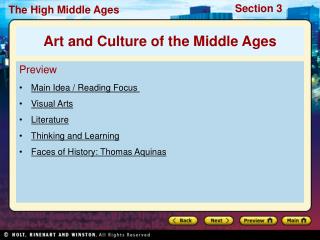 FEUDALISM AND THE MIDDLE AGES - . feudalism. feudalism is the political and social system of the middle ages. a lord

This is… - . chaucer jeopardy!. this group was at the top of the feudal order. this system of government operated

COMMEDIA DELL’ARTE - . the historical background italy in the high-middle ages. being the core of the mighty roman

The Abbreviation systems from the Roman Era to the Middle Ages - From bologna to the blogosphere. a history of written

The Late Middle Ages And the Renaissance - . the black death. loss of 1/3 of european population (mostly in cities)

Hospitality And Tourism Research - . the beginnings of research. started in the late 18th century during the middle ages

Europe’s Transition from the Middle Ages to the Renaissance: 1300-1550 - . woodcut of dance of death by michael