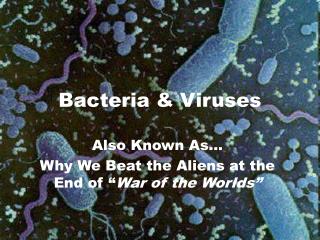 Bacteria & Viruses Also Known As… Why We Beat the Aliens at the End of “ War of the Worlds” Bacteria – Basic Info Bacteria were the first forms of life on the planet. They arose from the organic soup of the primordial Earth. There are several characteristics that all bacteria have in common:

Hepatitis A-E Viruses - . an overview. what is hepatitis?. hepatitis is an inflammation of the liver, that may be caused