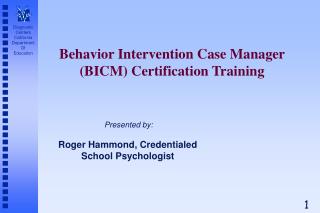 Integrating Care through the Use of Screening and Brief Intervention in HIV Settings - . trainer’s name training date

Response to Intervention: Getting Going Where to Start - . national association of school psychologists advanced

Screening, Brief Intervention, and Referral to Treatment (SBIRT) - . training overview. our goal for this training is to

BICM Certification Training - . part 3 february 26, 2003. welcome. who we are today’s agenda what we will accomplish.