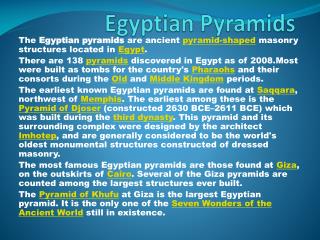 Egyptian Pyramids. The Egyptian pyramids are ancient pyramid-shaped masonry structures located in Egypt . There are 138 pyramids discovered in Egypt as of 2008.Most were built as tombs for the country's Pharaohs and their consorts during the Old and Middle Kingdom periods.

Egyptian Art - . by: kevin and ethan. pyramids. these mountain like structures were built for pharaohs. these were also

P o p u l a t i o n Pyramids - . population pyramids are graphs that can tell us a wealth of information about a place's

Pyramids - . resting place of the pharaohs. just how many ?. between 80-113 pyramids most are just rumbles, thus

Egyptian Pyramids - . mastabas. mastabas were early one level tombs with sloping walls so that the flat roof was actually

Pyramids - . lesson 11-3. history. when we think of pyramids we think of the great pyramids of egypt. they are actually

Egyptian Theatre 3000 BC - . ii. significant people of this period: the pharaoh. iii. theatre architecture: temples and

Egyptian Pyramids - . main purpose was for a tomb of the pharoah. cataracts. rapids along the nile river. fertile

Predynastic Egyptian Pottery - . image courtesy of the petrie museum, ucl. what is predynastic egypt?. essentially, it is

Pyramids on the Nile - . chapter 2 section 2. do now: take out hw and switch with a partner; discuss your answers in a

Egyptian pyramids and tombs - . old kingdom egyptians began to build pyramids to house their dead pharaohs there are

Egyptian Achievements - . weights and measures. - cubit —length of a mans forearm used many systems of pulleys for