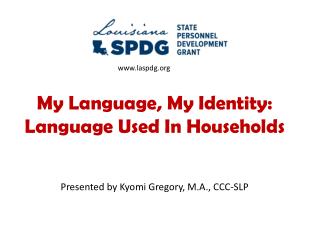 Hardware Description Language - Introduction - . hdl is a language that describes the hardware of digital systems in a

Hardware Description Language - Introduction - . hdl is a language that describes the hardware of digital systems in a

BECAUSE - Know yourself. because. improvement. begins with…. i. forming of perception language vs. communication non -

Seeing Patterns and Learning to Do Things and what that has to do with language - . david tuggy sil-mexico. is “the

PROPERTIES OF LANGUAGE - . language is dynamic: change is a matter of fact and not a symptom of decay unfolding of

The Language of Prospecting with the ISA dreamteam - . table of contents. chapter 1: the language of prospecting tips and