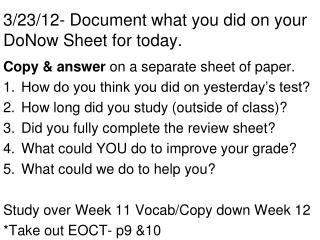 3/23/12- Document what you did on your DoNow Sheet for today. Copy & answer on a separate sheet of paper. How do you think you did on yesterday’s test? How long did you study (outside of class)? Did you fully complete the review sheet? What could YOU do to improve your grade? Election of 1864 - . on a half sheet of paper. how hard did you find the last test? what was your biggest struggle with

Pre-Class 3/19/10 - . grab a handout from the front on your way in. sit down and read the document quietly. answer

WITH 2 or 3 others at your table… - . don’t forget! your parent signed sheet was due yesterday!!. discuss: what

The Prophesy Fulfilled The King’s Rejection Foreshadowed – Chapter 12 From a Sheep to a Fish - . did you eat fish on

Catalyst 1/23/2012 - . grab you binder and immediately take a seat get out your personal folder if you have it. put your

Today is October 3, 2012 - . you need to finish your review sheet from yesterday on your own! there is no talking for the

9-3-10 - . english. bell work:. write the following questions in your english journal and answer them. how did you feel

SLO Training - . schalmont july 31, 2012 start with your blue reflection sheet. chat with your neighbors. what do you

November 12, 2008 Meeting - . before we start, 3 presenter questions. what did you come for today, and what must you

What Did You Eat Today? - . fourth grade life science unit. content standard. s4l1. students will describe the roles of

WHAT DID YOU HAVE FOR BREAKFAST TODAY? - The importance of breakfast. we have all heard that breakfast is the most

Friday 12/3/10 - . warm-up: was th e election of louis-napoleon a victory for the radicals? explain your opinion. -monday

10/3 - . tests are not graded. if you were absent yesterday you can take the test today after school solve now: a stone