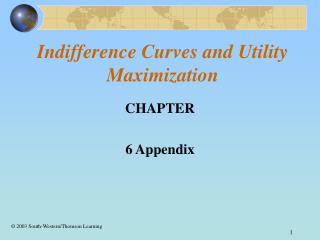 Utility theory - . utility is defined as want satisfying power of the commodity. marginal utility- increase in the total

Consumer Choice Utility maximization - . do you shop incessantly? did you ever have buyer’s remorse?. what makes you

Utility Functions and Indifference Curves: Getting Into the Consumer’s Head - . a utility function indicates how a

Utility Maximization - . chapter 19. time value of $$$. the value of money in the future, once interest has been

Utility maximization - . the goal of the consumer is to maximize utility given the budget constraint. let’s see what

Indifference Analysis - . shape of ‘clive’s’ an indifference curve. a. notice that this curve is downward sloping