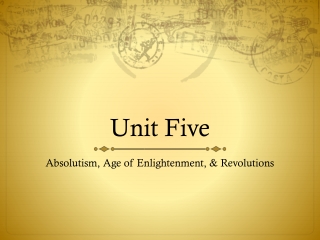 Unit Five. Absolutism, Age of Enlightenment, & Revolutions. Standards – Absolutism & Revolution. SSWH14 The student will analyze the Age of Revolutions and Rebellions. Examine absolutism through a comparison of the rules of Louis XIV, Tsar Peter the Great, and Tokugawa Ieyasu . Unit Five - . planning a motorcycle tour with mom. extension activity. by joy huang. you are going to see a map of taiwan

Unit Five - . language and communication. language is symbolic. there is an arbitrary connection between words and the

Unit Five:  - . middle childhood ages 6 to 12. 5.1 unit overview:. developmental changes during childhood. what are the

Unit Five - . the road to war. eq: which economic, social, and political events contributed to the outbreak of the civil

Unit Five - . language. teaching aims. to reflect on various ways of communication with a focus on language to critically

Unit Five - Cruelty. unit five. objectives:. students will be able to : grasp the main idea and the structure of the text

Unit Five - . are you ready for it???. acuity. noun sharpness (particularly of the mind or senses) synonyms: keenness,