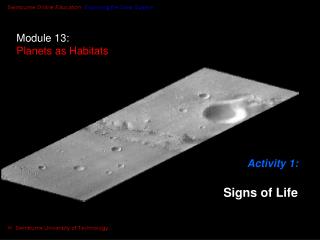 Module 13: Planets as Habitats. Activity 1: Signs of Life. Summary:. In this Activity, we will investigate: (a) Astrobiology (b) Searching for water on Mars (c) Follow the Water! (d) A Land of Lakes? (e) Habitable Zones (f) Searching for Signs of Ancient Life on Mars, and Vital Signs - . dentalelle tutoring. recording of vital signs. at the new patient exam (and in some cases every

Transition Activity #1 - . self determination/self advocacy activity: students interview one of the following types of

Vital Signs - . what are the standard vital signs that will be important to providing pt treatment?. blood pressure (bp)