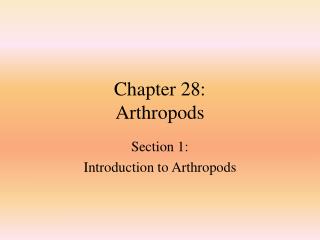 Phylum Arthropoda (The Arthropods) - . by far and away, the most successful animal group ever to live consists of over 1

Arthropods - . arthropods are the most diverse phylum today and probably also in the geologic past. they are a highly

Arthropods - . the jointed-legged invertebrates. characteristics. makes up 3/4's of all animal species -total number of

Arthropods and Echinoderms - . ms. moore 2/15/13. introduction to the arthropods. phylum: arthropoda what is an

Arthropods - . insects, spiders, crabs, and lobsters are all arthropods, so there are a lot of arthropods on earth. the