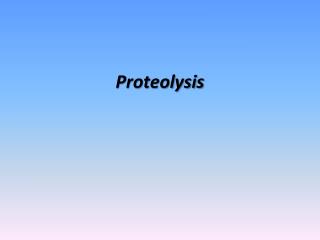 Proteolysis - Is the breakdown of proteins into smaller polypeptides or amino acids. proteolysis is usually catalyzed by

Signaling Pathways that Depend on Regulated Proteolysis - . 7 may 2007. identified through genetic studies in drosophila.