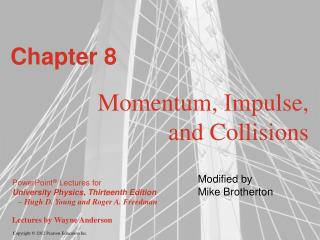 Chapter 8. Momentum, Impulse, and Collisions. Modified by Mike Brotherton. Goals for Chapter 8. To learn the meaning of the momentum of a particle and how an impulse causes it to change To learn how to use the conservation of momentum To learn how to solve problems involving collisions