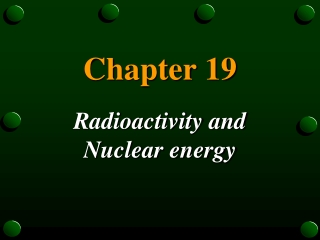 Chapter 19. Radioactivity and Nuclear energy. This sort of chemistry doesn’t involve the electrons It’s all wrapped up in the nucleus Think about nuclear processes and what parts of our lives are they involved in… Nuclear weapons, power plants, radioactive dating, nuclear medicine.