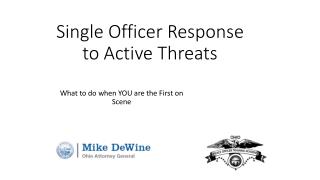 Single Officer Response to Active Threats. What to do w hen YOU are the First on Scene. We need to change our MINDSET!. The saying that when this happens “It’s a bad day to be a cop” should not be the lens we view our response through…. APPROACH TO MONOARTHRITIS - . dr cb nel. “ inflammation of a single joint” acute chronic. where is the inflammation?.

Incident Response - . in a microsoft world. by john k. aka mushin@securityhorizon.com. over view (intro). incident

Coordination and Response in Plants and Animals - . introduction. response of plants and animals. syllabus objectives