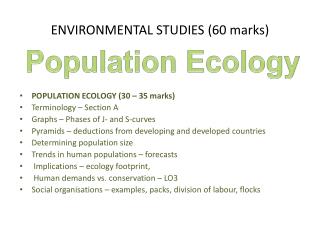 Human Population and Sustainability - . unit 1 – chapters 6, 1. essential questions. how has the population of humans

TOPIC 5: ECOLOGY and EVOLUTION - . 5.1.1. species: a group of organism that can interbreed and produce fertile offspring.

Ecology Unit - . what is ecology?. ecology- the scientific study of interactions between organisms and their

Ecology - . s4l1. students will describe the roles of organisms and the flow of energy within an ecosystem. a. identify