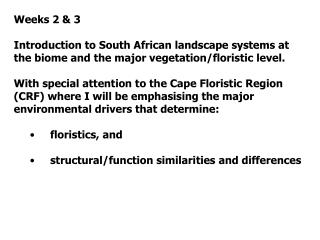 Weeks 2 & 3 Introduction to South African landscape systems at the biome and the major vegetation/floristic level. With special attention to the Cape Floristic Region (CRF) where I will be emphasising the major environmental drivers that determine: floristics, and Desert Biome - . what is a biome?. a biome is a geographic area characterized by specific kinds of plants and animals.

African Civilizations: c. 800-1600 CE - . aim: to learn about several major civilizations of the african continent in the

Principles for a Sustainable Landscape - . water-efficient landscaping is a major component of sustainable landscaping

INTRODUCTION TO BRUSSELS AND THE INSTITUTIONAL LANDSCAPE - 1. eu lobbying for turkish businesses â€œ how to represent