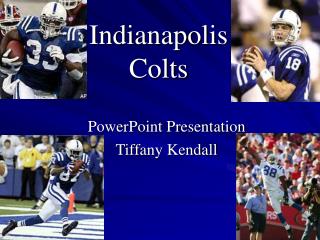 Indianapolis Colts. PowerPoint Presentation Tiffany Kendall. Colts History. 1946 – The bankrupt Miami Seahawks were purchased and relocated to Baltimore, Massachusetts 1946 – They were renamed “Colts” as a result of a contest in Baltimore won by Charles Evans Indianapolis Colts Tickets - Get indianapolis colts tickets and enjoy your game with your friends and family. we provide

Ruddington colts - . by jake king. info about web. there is lots of thing to do and print the newsletters are on the info

KC COLTS 33 Stack - . this is an introduction to the colt 33 stack defense. this presentation will cover the following

USS Indianapolis - . “so why did so many sailors

Plumber Indianapolis - #1 plumber in indianapolis. we at acme plumbing are focused on conveying proficient pipes and