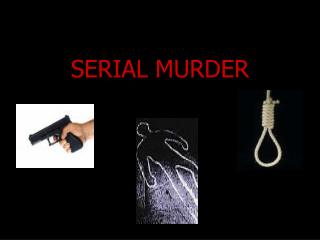 SERIAL MURDER. Serial Killer. someone who commits three or more murders over an extended period of time with cooling-off periods in between in between crimes they tend to appear quite normal. Mass Murderer. individual who kills three or more people in a single event and in one location Definition of ‘Serial Murder’ - . a series of three or more killings, not less than one of which was committed

Serial - Networktv is watch tv from all around world, anywhere in world. we are providing diifrent types of channels all

The Analogy of Serial Murder Case as A Semi-Hamilton Simple Graph - . by : megawati (j1a106023). reasoning of