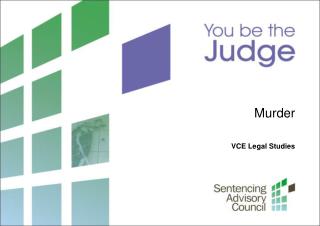 VCE Legal Studies. Murder. 1. What is sentencing?. What laws guide a judge when sentencing? What types of sentences can be given in Victoria?. Photo: John French / Courtesy of The Age. Chief Justice Marilyn Warren of the Supreme Court of Victoria. Who is responsible for sentencing?.

Seductions of Crime Jack Katz - . ch. 1 righteous slaughter people murder to defend what they believe is “good” in

The Da Vinci Code: What to Make of It? - Robert c. newman what’s the buzz? the da vinci code is a novel that has

Quiz - . where did you derive your views on abortion and sanctity of life? have you/are you, willing to do honest

MULTIPLE CHOICE - . the lord of the flies. 1. whose responsibility is it to maintain the first signal fire?. piggy’s .

Wanted - . kissin’ kate barlow reward: a kiss from ms. barlow (no, we’re just kidding). she is wanted for murder and