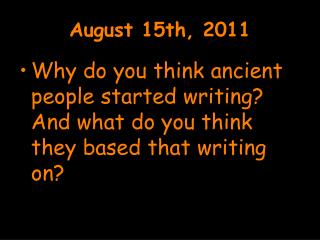 August 15th, 2011. Why do you think ancient people started writing? And what do you think they based that writing on?. August 16th, 2011. What two Rivers were located in the Fertile Crescent? What impact did this have on the people living there?. August 17th, 2011. August 2011 - Unc mod 392/ igt mod 040 proposal to amend annex a of the csep nexa table, by replacing the current version

August 2011 - Introduction to the globally harmonised system of classification and labelling of chemicals (ghs). august

August 2011 - . archdale-trinity middle school finish strong! “the only place success comes before work is in the