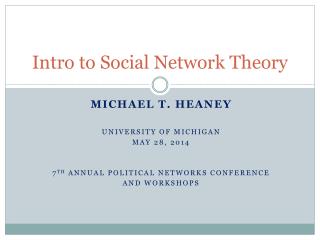 Intro to Literary Theory - . cher schwartz. what is literary theory/criticism/lens?. interpretive tools that help us

Intro to Color Theory - . color is possible because of the energy of the sun filters through the earth’s atmosphere.

Intro to Game Theory - . revisiting the territory we have covered. a look at the skeleton. there is a fairly small set of

Intro to IR Theory - . with william kim and friends. state sovereignty. says that we should not interfere with the

Intro to Social Coaching - . james emmett www.socialcoachinginstitute.net apse webinar. theory of mind. what if i don’t

Intro to Theory of Computation - L ecture 8 theory of computation converting a pda to a cfg pumping lemma for cfls. intro