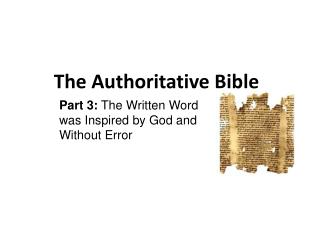 Why I accept the Bible as authoritative - . howard culbertson southern nazarene university. 1. its internal claims to be

Authoritative Branding - . how to leverage your educational value to become your industry’s authoritative voice, and

Jesus the Authoritative Rabbi - . to some jesus was not seen as the person he was, a rabbi. the pharisees and many people

Jesus the Authoritative Rabbi - . by: abraham tekle and david de leon. what does this mean?. as a rabbi, jesus interprets

Authoritative Ideas in Augustine - . “the creation and fall of man” . status of scripture. u ltimate arbiter of

The Bible - . god’s special way of speaking. objectives. i. answer the question: “can we trust the bible to be

THE BIBLE - . god’s living word . living words. all scripture is inspired by god and is useful for teaching, for

The Bible! - . question 1 - 10. this man was one hundred years old when the lord answered his prayer and gave him a

The Bible - . mrs. kenny- november 2012-religion 9. what is the bible?. why are there different versions of the bible?.

THE BIBLE - . a christian apologetic. [i] questions concerning the bible. is not much of the bible borrowed from other

The Bible - . a crash course in 8 sessions session 1 background – part 1. oscar wilde’s view of the bible. the book