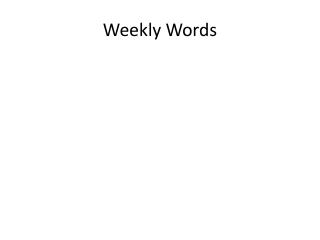 Weekly Words. Acrimonious. Acrimonious Adjective Bitter or sarcastic in temper, manner or tone This book is an acrimonious attack on the present administration. Acumen. Acumen (noun) Keenness of mind or judgment She shows great acumen as a businesswoman. Affinity.

Words of the Week, Set 2 - . copy the words and definitions onto your wow sheet. then, complete the form for you to use

Words Their Way and Word Study in Third Grade - . the goal is to teach our children to become word solvers . . . to read Week 5 reading CVC and Dolch list words in sentences - . ideally, prior to showing these slides, print the slides and cut

6 th Grade Weekly Word Work Week 2 - . day one: meet the word. bene -. day one record the word part and its meaning into