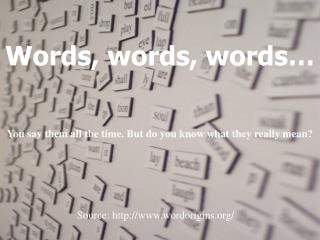 Words, words, words…. You say them all the time. But do you know what they really mean?. Source: http://www.wordorigins.org/. Paparazzi: Creativity - . crs/edl 560 foundations of creative learning and thinking. will this be on the test?. brainstorm – a

OUR COMMUNICATION : - Words -How we say these words (our tone, pitch, volume, etc.) -Non-verbal communication - . less