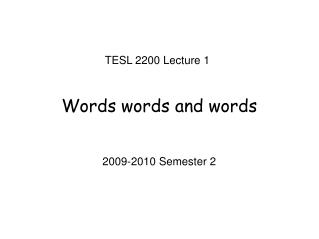 Words words and words. TESL 2200 Lecture 1. 2009-2010 Semester 2. Warm-up questions. How big is the lexicon of English? How many English words do any of us know? How do we calculate size, with such an amorphous phenomenon? Where does the vastness of the lexicon come from? Words, words, words… - . you say them all the time. but do you know what they really mean?. source:

Concrete words Abstract words Nonsense words - . for each type, there are 20 words. you’ll get 2 minutes to remember

Words - . as a form of art. to think about…. do words count as art ? do they have to be arranged a certain way to count

Words - . the unit. lexicology: the word. morphology: the morpheme. phonology: the phoneme. phonetics: the phone.

Words - . personal identity collective identity hegemony. housekeeping. you will have a quiz on friday. it will be a word