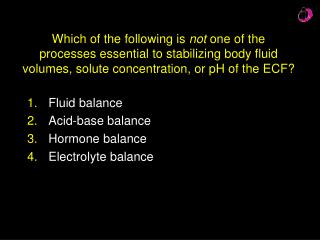 Which of the following is not one of the processes essential to stabilizing body fluid volumes, solute concentration, or pH of the ECF?. Fluid balance Acid-base balance Hormone balance Electrolyte balance. Acid Base Balance and Fluid Balance - Homeostasis. a delicate balance of fluids, electrolytes, and acids and bases is

Fluid, Electrolyte &amp; Acid-Base Balance - . eq: how does our body maintain a balance of water and electrolytes?.

Acid – Base Fluid Balance - . what is fluid balance. homeostasis – a state of body equilibrium or stable internal

Acid-Base Balance - . 205b. educational objectives. describe the relationship between the lungs and the kidneys in