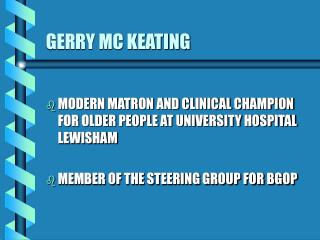 Gerry - This is a sample of pecha kucha (20 slides x 20 secs. per slide!) it reflects mgt open’s commitment to teaching

Joey and Gerry - . by harrison. a long time ago on a stormy day there was a cat called joey. joey was brown and small

Gerry Brandon Entrepreneurs - . are always looking for money. get over it!!!. serial entrepreneur raised €20 million

THE KEATING FIRM LTD - Your personal injury case needs to be a strong one in order to reach a settlement. there are some

Meet Mr. Gerry…. gerrymandering - . a close read. instructions. as we answer questions about the texts, please try to

SIAS July 2009 Con Keating - . the limits to quantitative risk modelling. for if he knows, then it is certain this will

Email update from Gerry - . i will sail with eric instead of stefan physicals will be in ollie berka's hands by the end

Mary Keating and Cathie Jasper - What you see is what you get – or is it? improving the quality and consistency of

MC, MR - Rule the firm should produce where mr = mc provided that above that output mc exceeds mr and below that output