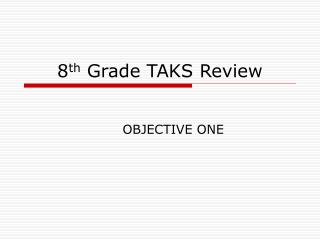 TAKS Final Review - Taks review. 1. what was the first permanent settlement in america and what year was it founded?a.

TAKS Strategies Review - . strategies review…. today we will review the strategies we have discussed over the course of

TAKS Review - . objective 5 the student will demonstrate an understanding of earth and space systems. plate tectonics

11 th and 10 th grade Math TAKS Review - . general calculator stuff. the memory will be cleared on the calculator before

TAKS Strategies - . writing taks. taks question. why is it that you take five days to work on essay in class and complain

Review of Grades 9 and 10 TEKS for Grade 11 TAKS - . taks objective 2: the student will demonstrate an understanding of

Math 7 Review - . 2008 taks. notes. these questions were gleaned from the 2008 released taks items. i tried to compare

TAKS Review Questions 2 - . what was the name of the pilgrim document on self-government ?. mayflower compact. who wrote