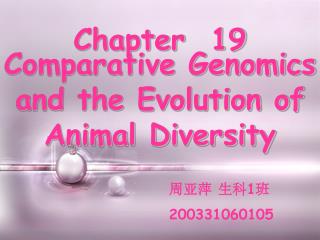 Chapter 19. Comparative Genomics and the Evolution of Animal Diversity. 周亚萍 生科 1 班 200331060105. The evolution of diversity among organisms is not due to the presence of different specialized genes. Rather,animal evolution depends on deploying the same set of genes in different ways.