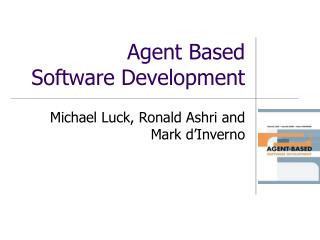 Agent Based Software Development. Michael Luck, Ronald Ashri and Mark d’Inverno. Agent Architectures. What kind of computational entity is an agent? Why architecture? to predict what an agent in its current state will do in its current environment Model-Based Software Development - Agenda. some terms to knowdefinition and good processmodelshistoryadvantages and

Agent-Based Modeling - . grace, kaitlyn, morgan. what is it?. model of a situation where various “autonomous agents”