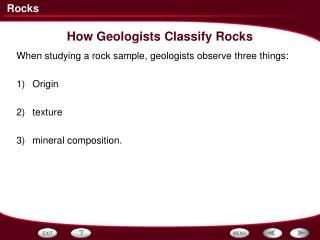 How Geologists Classify Rocks. When studying a rock sample, geologists observe three things: Origin texture mineral composition . Texture. Texture is the look and feel of the rock’s surface. Texture can be smooth, glassy, rough or chalky. Geologists - . you could end up doing some of these things! ok, maybe you wouldn’t want to look like some of them….

Problem 7 EQ: How do geologists determine the actual age of rocks? - . they use radiometric dating!. the key to

Welcome….Geologists - . bell ringer: 2.7.13 quickly look up what this scientist, mary leakey, was famous for and

How can we classify change? - . what things changed in monday’s lab?. which did not change?. physical change. changes

How do geologists think about a watershed? - . rivers are just the surface. water &amp; sediments!. geological river

Visiting Geologists Program - . geologic co 2 sequestration. lawrence h. wickstrom. why sequester co 2 ?. like it or not,

Evolution Unit! How To Classify Organisms - . objective: swbat use classification system in order to organize living

How are Rocks Formed? - . engagement. observe the sample rocks and choose one and write a description. (using your five

How do we classify P lants ? - . 5 th grade. scientists study what is inside plants to divide them into 2 groups. what

EAR: How to Classify Your Products - Get an overview of export administration regulations and learn how to classify your