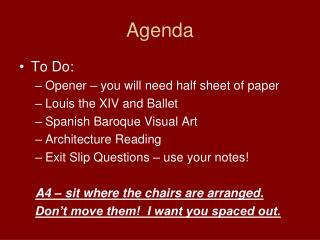 Agenda. To Do: Opener – you will need half sheet of paper Louis the XIV and Ballet Spanish Baroque Visual Art Architecture Reading Exit Slip Questions – use your notes! A4 – sit where the chairs are arranged. Don’t move them! I want you spaced out. Agenda - Bridging multi-core and distributed computing: all the way up to the clouds. d. caromel , et al. 1. background: