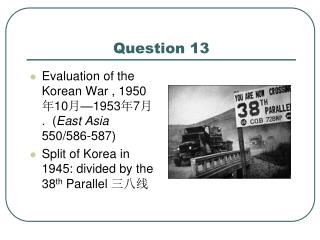 Question Quiz 1-8-13 - . 1. why is childproofing a house important when you have kids? 2. when watching children, why is

Monday September 13, 2010 Hypothetical Question - . if you had 30 seconds to address the whole world in a speech, what

Question of the Day – 09/13 - . mutualism is a symbiotic relationship in which both organism benefits from the

Topic 13: ORBITAL HYBRIDIZATION: The question of shape! - . we need next to examine the relationship between: isolated

Beautiful Question Project Philosophy 103, Spring ‘13 Caroline Vonasek - What role does hope play in people, and their