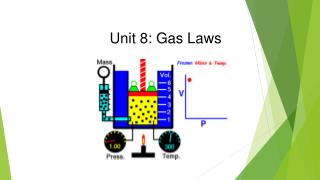 Unit 8: Gas Laws. Elements that exist as gases at 25 0 C and 1 atmosphere. Physical Characteristics of Gases. Gases assume the volume and shape of their containers. Gases are the most compressible state of matter. Gases will mix evenly and completely when confined to the same container. Gas Laws - . solid - molecules are held close to each other by their attractions of charge. they will bend and/or

Gas Laws - . james caudle wendy cook john putnam. now that you have seen and done “crush the can”. here it is on a

Unit 9: The Gas Laws - Chemistry. unit 9: the gas laws. the atmosphere.  an “ocean” of gases mixed together .

Unit 6: Gases and Gas Laws - . particles of matter are always in motion volume of individual particles is  zero.

Unit: Gas Laws - Day 1 – notes. unit: gas laws. review and introduction. after today you will be able to…. explain

Unit: Gas Laws - . ideal gas law. after today you will be able to…. explain what an ideal gas is calculate an unknown

Gas Laws - . the work of boyles, charles, dalton, graham and other scientists explains the behavior of gases. . high

Gas Laws - . characteristics of gases. substances that exist as solids and liquids can exist as gases. called vapors.

Gas Laws - . elements that exist as gases at 25 0 c and 1 atmosphere. physical characteristics of gases. gases assume the