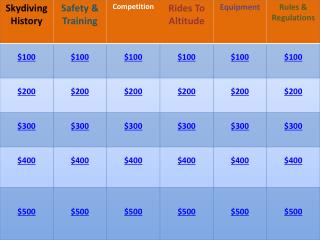 Answer. BACK. This former USPA Executive Director recently retired following 13 years in the position . This woman is credited as the first woman to manually activate a parachute after exiting an airplane in flight. Answer. BACK. In this year, Joe Kittinger Exited a balloon gondola Do the following (in this order) - . clear off your desks (except for periodic tables i gave you yesterday in class)

Executive Director of the - Venusval hammack. executive director of the. ngwrc board member 2004-2005. presenting to the

PNS Executive Director - . planning for the future. agenda. should we have an executive director? position description

Bouquet Balloon - Http://www.rozanz.com/ %keyword%, rozanz only looks expensive! we are anything but ordinary! call use