Do now – on a new piece of paper - PowerPoint PPT Presentation 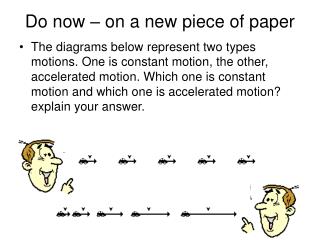 Do now – on a new piece of paper Do now – on a new piece of paper

Waves and Sound - . intro. a. pick up your notes and worksheet packets b. write the following questions on a blank piece

Memory - . what the heck is going on in there?. name the seven dwarves. take out a piece of paper. difficulty of task.

Obsessive Compulsive Disorder - . beginning activity. on a piece of paper i need you to answer the following questions:.

Energy - . bellringer. write your name on a piece of loose leaf paper. take out your lab from last year pendulum pun.

Literature &amp; Film Fall 2013 Ms. Wise Theme Song - Welcome! please have a seat where you like for today and

Activity - . you will be given a piece of paper. tape it on someone else’s back. objectively, think of some desirable

Chapter 9 - . memory. table of contents. exit. class activity. get out a piece of paper,

Who is the protagonist in this story? - Are you ready to take the end of book test for someone is hiding on alcatraz

Creative Briefs and Briefing - . black pencil academy, toronto. agenda. 1. what is a brief? 2. filling in the boxes

Foods I - . mrs. peaden westlake high school. please pull out a blank piece of paper, write your name at the top and

Know the Simple Tips to Complete Your Research Paper Writing Service! - A lovely piece of academic writing that is