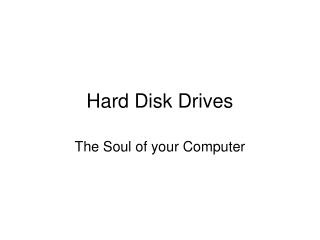 Hard Disk Drives. The Soul of your Computer. Mechanically Speaking. Individual Disks, or Platters Read/Write heads for each platter on actuator arms controlled by servo motor. At arm’s length. Platters are made of aluminum (hence “hard”) with magnetic media on each face. Secondary Storage - . what is a cylinder? a track? what is secondary storage? what is flash memory? see unit b in your

HDD: Hard Disk Drive - By tyler beckett janaki ramachandran why are we

Implementing Hard Drives - . chapter 10. overview. in this chapter, you will learn to explain the partitions available in

Inside the Box - The vital pieces operating systems printers new canaan library winter 2002 what we will look at: cpu or

disk stack centrifuge - . presented by. daniel, emily, etienne. the outline. of our presentation. purpose of