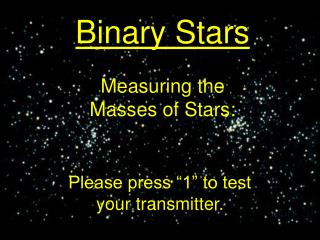 0. Binary Stars. Measuring the Masses of Stars:. Please press “1” to test your transmitter. 0. Binary Stars. More than 50 % of all stars in our Milky Way are not single stars, but belong to binaries :. Pairs or multiple systems of stars which orbit their common center of mass. Approach to Mediastinal Masses - . clinical presentation: 33% of all masses present in patients less than 15 years old

Week 3 The Sun and Stars - . part i light, telescopes, atoms and stars. the light of astronomy. electromagnetic radiation

STARS - . what is a star? why do they shine? how old are they?. stars shine for millions to billions of years, much

Shooting Stars Carol Anne Duffy - . we are learning to:. identify and annotate the use of poetic techniques. to be a