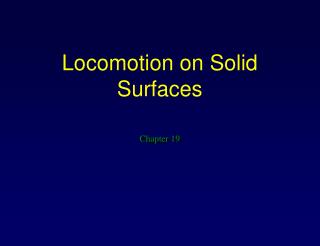 Locomotion on Solid Surfaces. Chapter 19. Objectives. 1. Identify and classify motor skills belong in the categories that fall under the heading of moving one’s body on the ground or another resistant surface Dynamics of Drop Impact on Solid, Dry Surfaces - . ashley macner a a departments of chemical engineering and physics,

LOCOMOTION - . locomotion . change in position of an organism survival value of locomotion 1. get food and shelter 2.

Locomotion - . locomotion. locomotion: the ability to move from one place to another motile: capable of locomotion

Locomotion - Essential questions. why did mobility evolve? what is the physics of movement? what forces need to be

Locomotion - . locomotion. ways that animals transport themselves from one place to another. animals have appendages that

Locomotion - . study guide review. 1. drag force would affect which of the following?. a. a runner’s shoes on the