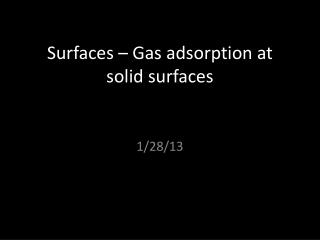 Surfaces - . lecture 17. determining diffusion coefficients. in practice, one would do experiments at a series of

Surfaces - . lecture 18. diffusion rates. probability of atom making a jump to vacancy is where ℵ is number of attempts

Walking Surfaces - . paving the way to success. where the sidewalk ends…. thousands of employees, guests and tenants