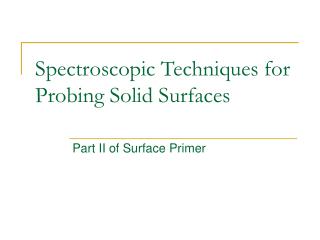 Part II of Surface Primer. Spectroscopic Techniques for Probing Solid Surfaces. Characterization of a Surface. To fully characterize a surface, we need to know: What types of atoms are present at a surface and what is their surface concentration? Dynamics of Drop Impact on Solid, Dry Surfaces - . ashley macner a a departments of chemical engineering and physics,