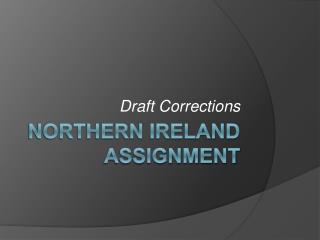 Draft Corrections. Northern ireland assignment. Factor 1: Divided Loyalties. The difference in political beliefs between the Protestants and Catholics also contributed to the conflict in Northern Ireland.

Conflict in Northern Ireland - . cy-woods high school world geography. where are we talking about?. protestants

Levels of Government in the UK - . learning outcomes: know what the different levels of government are in the uk begin to