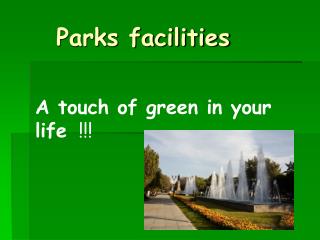 Improving Parks and Community Facilities - . what do we mean by improving parks and other community facilities?. a

Rosa Parks - . shahrukh khan. who she

Royal parks - . Презентация Соболевой Насти. hyde park  is one of the largest parks

Rosa Parks - . was an african-american civil rights activist called the mother of the freedom movement she got on the bus

NATIONAL PARKS - . countries have established more than 1,100 national parks, but most are threatened by human

National Parks - . a national park is a park use for conservation purpose; it's category of protected areas. national

Rosa Parks - . 1001. rosa parks was a quiet black seamstress who sparked the montgomery bus boycott by refusing to give

Rosa Parks - . by: vrusha and anna. born in february 4 th 1913 her childhood was lonely lived in tuskegee , alabama her

Rosa Parks - . african american struggle for equality: a civil rights hero name. rosa parks is often referred to as the

Gordon Parks - . “i suffered evils, but without allowing them to rob me of the freedom to expand.” —gordon parks

THEME PARKS - . theme parks are quite new to the united kingdom but now there are dozens dotted around the country. theme