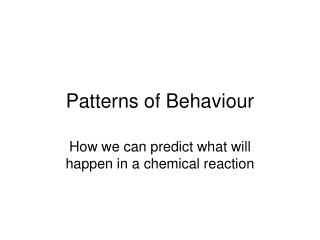 Patterns of drinking behaviour and incidence of diseases amongst Scottish adults - . presented by: dami olajide

Development of Behaviour - . psychology 3106. introduction. so far we have looked at evolution and genetics go together

Functions of Behaviour - . behaviour patterns are usually adaptive. they help the animal survive and/or reproduce.

Behaviour - . “i saw the angel in the marble and carved until i set him free” michelangelo. ofsted stats. ofsted

PRINICIPLES OF CONSUMER BEHAVIOUR - . choice and utility theory:-. what is utility ? utility means satisfaction. it is a