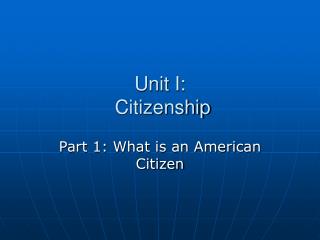 Unit I: Citizenship. Part 1: What is an American Citizen. Civics. The study of the rights and duties of citizens. What is a Citizen ?. A member of a community who owes loyalty to a government and is entitled to protection from it. What does citizenship entail?.