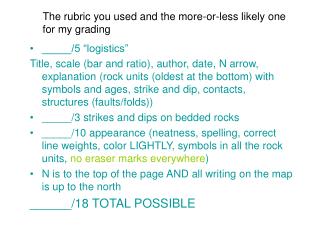 The rubric you used and the more-or-less likely one for my grading. _____/5 “logistics” Title, scale (bar and ratio), author, date, N arrow, explanation (rock units (oldest at the bottom) with symbols and ages, strike and dip, contacts, structures (faults/folds)) CHAPTER 3 - . strategic and financial logistics. learning objectives. to appreciate how logistics can influence an

Chapter 12 International Logistics - . learning objectives. to identify the reasons for governmental intervention in the

Performance Based Logistics - . presented to the . 2007 sole/dau/logsa &quot;performance based logistics

From Theory to Action - . a pragmatic approach to digital preservation strategies and tools. a digital powrr workshop.