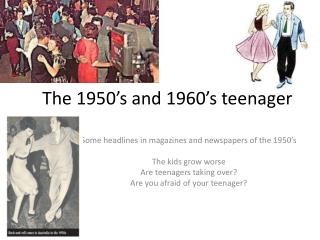 The 1950’s and 1960’s teenager. Some headlines in magazines and newspapers of the 1950’s The kids grow worse Are teenagers taking over? Are you afraid of your teenager?. Show Rebel without a Cause. Class Discussion: How is an American teenager portrayed in this film?. Election of 1960 - . nixon versus kennedy. background: dwight eisenhower had just finished up 8 years of serving as