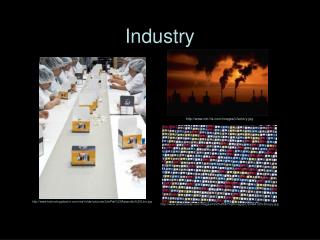 INDUSTRY - . rachel meggers and ben seely. industrialization: the growth of manufacturing activity in an economy or a

Industry - . key issue 1: where did industry originate? key issue 2: where is industry distributed? key issue 3: why do

Industry - Ap human geography. industry. big ideas. what is industry? what impacts did the industrial revolution have?

Industry - . http://www.economistpakistan.com/news/industry_2.jpg. definition. industry – the manufacturing of goods in