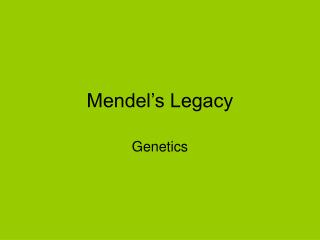 Heredity The passing of traits from parent to offspring - . genetics the study of heredity gregor mendel is known as the

S aint P eter and the V atican: The Legacy of the Popes - . map of the vatican city. important dates regarding the

The Legacy of Aristotelian Ethics - . william

Chapter 14 - . mendel and the gene idea. preformationism – an pre-mendel hypothesis of heredity. claimed either the egg